(from my book of essays and sketches, ‘Feelings Run Faster’, published by Boyut, Nov 2012)

across the country beyond
social classes and geographic regions, is another
manifestation of claiming ownership
of a product that is not Turkish per se, but
was made our very own through a cultural
‘processing’. Tea as a plant did not grow in 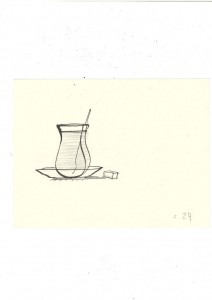 Turkey (at least endemically) until 1930s
and tea as a drink was not an essential part
of our lives. My father, a child in 1920s and
30s used to drink milk at breakfast, while
my grandfather additionally had a small cup
of coffee with no sugar right after the breakfast and lunch.
Tea is a “republican” drink, while coffee
is more “imperial”. Our cuisine has been
succesful in , importing and incorporating
non-self (“foreign, other”) tastes and dishes
utilizing the exact same tongue and nose (for
taste and flavor) we used for ‘our’ very own
tastes and dishes. We exploit the same neural
mechanisms when we import a behavior
or a lifestyle using the same brain structure
in order to generate a new “frame of mind”.
Imitation may be one the underlying abilities
for this cultural transformation, and
have worked well in Westernization and
Islamization of the society during different
periods of history.