Predictors of ADHD persistence in elementary school children who were assessed in earlier grades: A prospective cohort study from Istanbul, Turkey | Yankı Yazgan 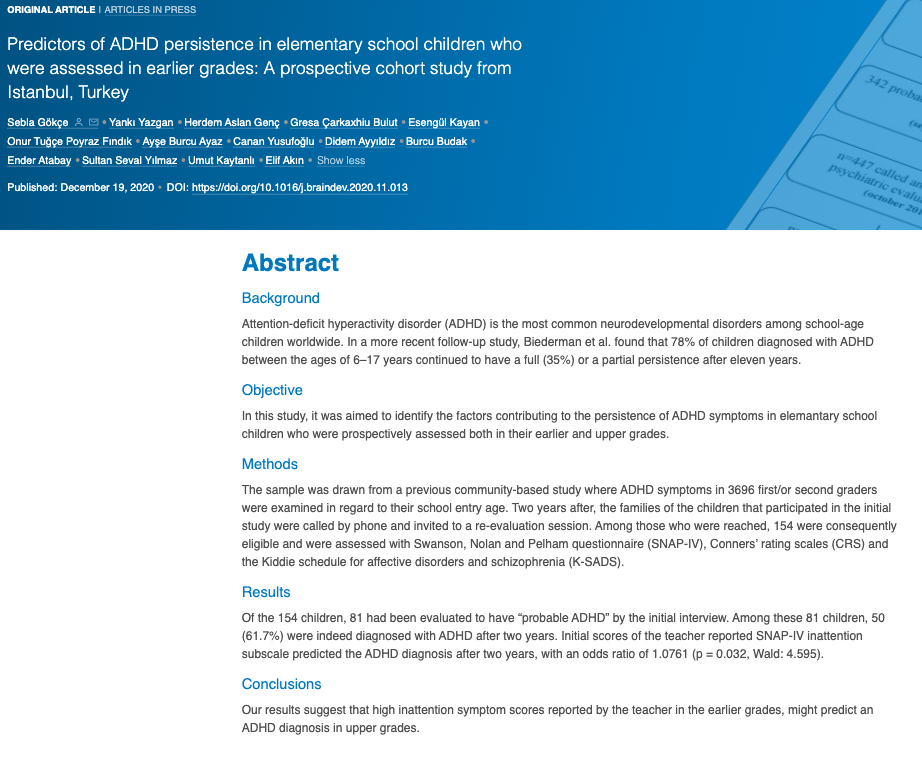 Background: Attention-deficit hyperactivity disorder (ADHD) is the most common neurodevelopmental disorders among school-age children worldwide. In a more recent follow-up study, Biederman et al. found that 78% of children diagnosed with ADHD between the ages of 6-17 years continued to have a full (35%) or a partial persistence after eleven years.

Objective: In this study, it was aimed to identify the factors contributing to the persistence of ADHD symptoms in elemantary school children who were prospectively assessed both in their earlier and upper grades.

Methods: The sample was drawn from a previous community-based study where ADHD symptoms in 3696 first/or second graders were examined in regard to their school entry age. Two years after, the families of the children that participated in the initial study were called by phone and invited to a re-evaluation session. Among those who were reached, 154 were consequently eligible and were assessed with Swanson, Nolan and Pelham questionnaire (SNAP-IV), Conners’ rating scales (CRS) and the Kiddie schedule for affective disorders and schizophrenia (K-SADS).

Results: Of the 154 children, 81 had been evaluated to have “probable ADHD” by the initial interview. Among these 81 children, 50 (61.7%) were indeed diagnosed with ADHD after two years. Initial scores of the teacher reported SNAP-IV inattention subscale predicted the ADHD diagnosis after two years, with an odds ratio of 1.0761 (p = 0.032, Wald: 4.595).

Conclusions: Our results suggest that high inattention symptom scores reported by the teacher in the earlier grades, might predict an ADHD diagnosis in upper grades.