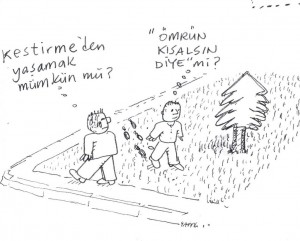 Though, neither coffee nor brain is Turkish.

How we make and savor the coffee makes it Turkish, and so is for the brain.

How we use our brains is set by the culture and environment we live, in other words by the context.

Obviously there is not a Turkish brain but there is a dominant form of brain functioning that fits well to the demands of Turkish social (also business, probably) environment. The distribution of the brain structural subtypes and their consequent behavioral profiles are somewhat stably present across subdomains

Immediacy is what the current Turkish context prioritizes. An overfocus on now; a vague future that yields either desperation or excessive hopefulness.

Makeshift solutions are somewhat necessary to respond to the urgency created by the immediacy of the environment. (hemen; right now, subito, depeche or alles vite!).

Fretting, for many, is a natural behavioral result of the ambiguity of communication and pushing demand for immediate results.

For example, the surface areas of certain brain regions (such as anterior cingulate) responsible for conflict detection and risk identification are correlated with certain behavioral traits such as harm avoidant or novelty seeking. The fact that whether and to what extent these brain regions operate independently of the regulating systems of the brain (such as DLPFC) is dependent upon the developmental and educational opportunities these individuals have had access to.

The environmental demands are determined by social, cultural and economic factors sometimes over decades. We do not know whether there are specific genes for transmitting these but obviously the emotional and social ‘climate’ proves to be sufficient for sustaining particular types of behavior subserved by universal neural circuits. Thus, we may think that excepting certain genetic isolates in distant regions most neural systems of the brain are used Turkish way due to the social structure and daily operational needs of life.

Cherry picker was the term I had learned from Hazim Bey, as a characterizing term for the Turkish customer.

According to this description, the Turkish customer finds the products with highest savings. It is hard to call this austerity or frugality, since the customer is so preoccupied with ‘saving’ on that particular item, s/he purchases it regardless of the need (this may now be the case for the worldwide customer).

The Turkish house is a reflection of this shopping attitude. You can see hallways and balconies full of gadgets of no use and all sorts of redundant items that were purchased just because of bargain finds… How specific is this to the people who name or feel themselves Turkish? Very little.

In the east, you sit and wait. With a little patience, things will come to you (Tanpinar).

Sometimes it is a successful strategy to jump on at the last minute; since things can change at any moment (as has been the dollar for years leaving a hard to erase mark on our fiscal memories). This also reminds me of a top executive who always waits for his name to be announced at the airport PA before he gets on board. ‘who knows, anything could happen in the meantime’. So the shortness of time, as shortness of breath, is reflected in the behavior of the survivors.

A happy life may consist of two functional elements:

Having a purpose, or a number of meaningful goals to pursue

Being able to establish and sustain relationships

Our brains are organized in affiliative and executive neural systems:

under ‘Normal’ conditions they work hand in hand .

Under demanding conditions of immediate and fast processing, goal oriented systems may override the relationship systems.

Climbing up vs. connecting conflict may be resolved thru linked in, where connectedness is in the service of maintaining or upgrading status.

Relationship orientation is not exclusively Turkish at all but premodern, that disappears as Turkey becomes more and more westernized in the sense of its social structure and functioning. Pamuk’s following paragraph reflects well what our people have felt about these lines that cut across our souls:

”..Between the ages of sixteen and eighteen, part of me longed, like a radical Westerniser for the city to become entirely Western.

I held the same hope for myself; but another part of me yearned to belong to the Istanbul I had grown to love by instinct, by habit and by memory. …“

“… When I was a child, I was able to keep these two wishes apart ( a child has no qualms about dreaming in the same moment of becoming a vagabond and a great scientist) but as time wore on, this ability faded and, with it, the melancholy to which the city bows its head – and at the same time claims with pride – began to seep into my soul...”