Artichokes Forever | Yankı Yazgan
An Izmir artichoke requires, from
us to fully savor its unique taste, a
high level of concentration and more time
to chew before swallowing its leaves, stalks
and small heart. A child is, by definition,
a person of the immediate moment, responding
to what s/he thinks (indeed, feels)
urgent and essentially not very much different
from ‘contemporary urban human
being’. S/he rarely has reached that level
of concentration (enough for enjoying the
artichoke) until age 12, or even 14 for a
boy, thus, almost no enjoyment borne out
of the experience. I avoided the experience
as much as I could, until one point
around the age of 15 or 16, when I came
back home from boarding school during a
spring break. Upon my mother’s insistence
that I should taste it this time (‘it will be
different’ she said), I tasted a small bit of
the heart and stalks floating in the olive oil.
I continued with sucking the leaves, and
my mind/brain allowed me to keep the stuff
in my mouth and fully concentrate on the
taste. I never said no to artichokes in my
lifetime since then. Not only the pleasure
I had was heavenly, but the awareness of
my being able to enjoy the pleasurable-not
at first bite artichoke was telling me that
I had transitioned to a different phase of
my life and my brain had begun working
differently. Urgency and immediacy would
not be able to rule my life as intensively as
they did before. 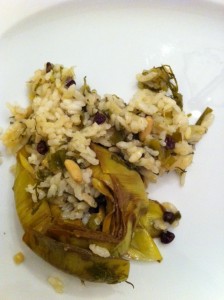